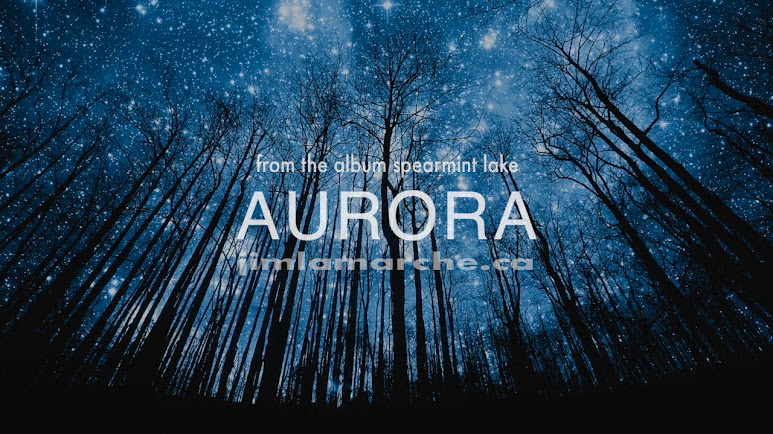 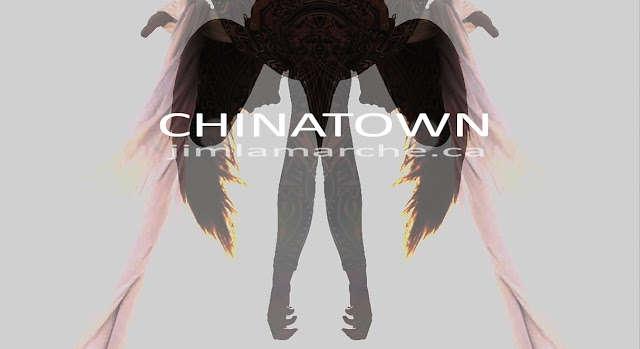 we are defined by our environment
almost always, people think like their friends & family do
(a new pandemic and it's global too)
It’s a ‘what you don’t know won’t hurt you’ game plan
with a good dose of shame and blame
in a recycled modus operandi
and all designed to
divide and conquer
originally blogged in 2017
(it's 2022 and the punishment continues ...)
right, let's redo/remix 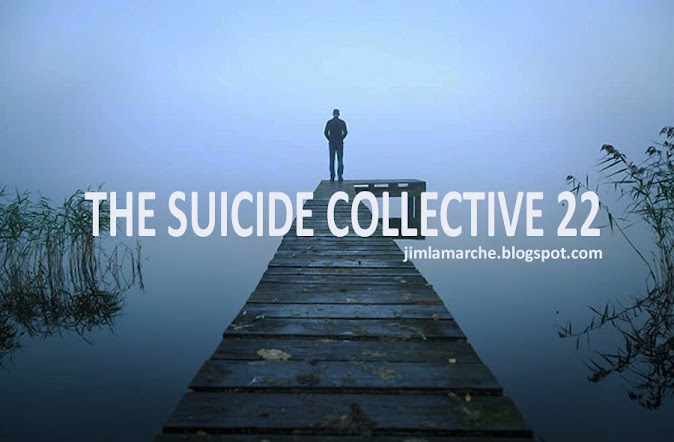 My Dad would have loved Trump.  Stoic, stubborn - ‘knows everything’ kinda guy w/a touch of torment, hatred of women and a penchant for payback.  Sound familiar?  The BIG man ... expensive suit, drives a BIG car and has a hot trophy wife (ok, you get it).
Payback

I mean ok (story is), my Dad got right royally fucked over and so now they need to suffer (yawn) … listening still.  It’s frikkin’ brutal.  Rambling on about street blacks in Detroit getting what they deserve, (intoxicated at 2pm).  Long pause.  The silence is deafening.  "So Dad, just how is it that they deserve being dominated and oppressed"?
Even longer pause and that recurring look of death.  Yikes!  I'm in trouble now.  I learned everything about the term "bleeding heart liberal"  that day, and then there was no room for continued discussion on that subject.
I'm right and you're wrong (always that massive fore-finger).
Period (end of story - vacant inebriated stare) 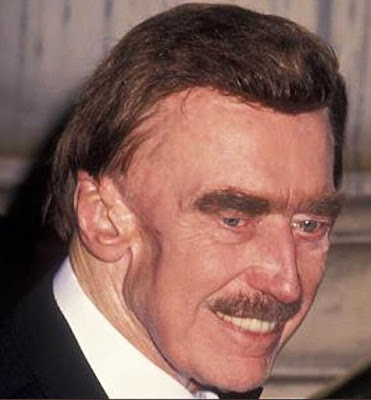 I was 30 and hadn’t seen him in years and honestly?  He didn't have any help (deciphering reality from fantasy). Sad. You see here’s the deal … he feels the world owes HIM something because he was left behind - abandoned, and so it was inevitable. He was abandoned and my last memories were that he was always drunk.
Ok, benefit of the doubt ... wait. You can do that?
Flipping the coin ... Woodstock during the depression was a shit-show and Dad was on the receiving end of a lot of serious pain. As the oldest boy of 4, he hated his Mother for watching & doing nothing when his Father regularly got drunk & strapped him w/his belt (buckle side) but hey - it's what Fathers do to maintain order & respect, clarity & discipline.
Right? ... (we all miss our Dads - some more than others).
Forcing him to dress up and go to church on Sundays even though he would have rather played marbles w/his friends out at the end of their dirt driveway, leaving home (kicked out) when he was 14 and became a telegraph operator in Timmins before joining the army in '42/43 at maybe 18/19.
In retrospect he liked bragging that it all helped him grow up to be a 'man'.
I guess my point being; toxic masculinity has been around for a long time. Long before Donald Trump showed up and dumped fuel on the flames. That said, growing up as a kid during the Great Depression, then WW2?
Maybe I'd be no different. 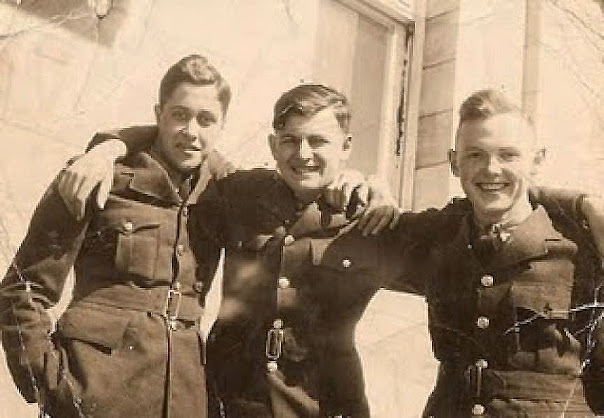 Fallout? It's to be expected. It's how we learn.
We had grown apart and his will to live was being compromised.  In disrepair.  He didn’t care (never did), a hint of suicide in the air (but would never/looks weak).  Perhaps even contemplating how much damage he can do first.  I remained distant. I had absolutely no idea what to do ... as lost as he was.  His resentment; my legacy.
It goes way back and continues, thanks to certain politicians who exploit fear & loathing in the masses for political gain. More-so now than ever ... compassion, common sense, the ability to reason and critical thinking have all been eclipsed by something much larger … entitlement.
The Division Bell
Tapping into people's resentment is a no-brainer, requiring very little work/effort w/the most to gain (politically). This is why it's so popular to the Populists.
Short story, if you're not with us, then you are one of THEM; an elite libby-tard who looks down your nose at the rest of us and you need to be punished! (just like I was).  Spoiled brat. It's a slam-dunk winner.

My theory is a simple one. Populist politicians pretend to be 'for the people' when in reality, the people are essentially pawns in a power game, dangling and don't know they're being used and even if they knew? ... it would be ok.
RULE #1. Deny & deflect.

I guess you didn't get the memo.  What’s real is no longer important because everything you see is fake news anyway, so fuck it.  IF we all get blown to smithereens?  At least I will have had the opportunity to make my point.  It's all about the collective.  It's about what's right.  It's about making the necessary sacrifices. This rant mirrors his. What's going on here? Not important. Look over there (pointing) ... all of our problems? ... are right over there!
'You're fired!' (God, that feels good). 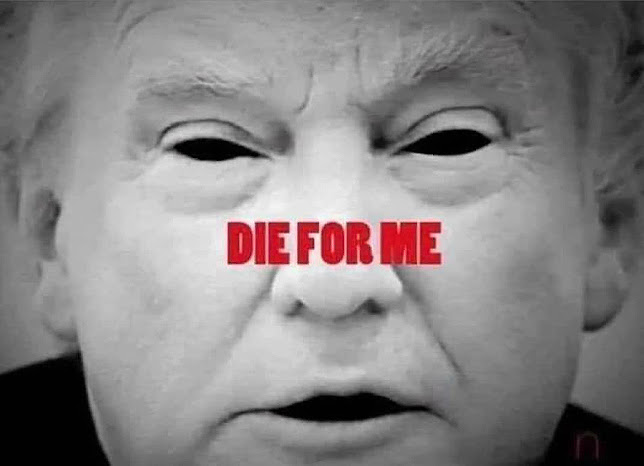 It's chasing brown people out the back door, while crusty old white guys slip through the front (in broad daylight) and clean the living room out.
All the problems in the world? … always someone else’s fault.  It's magic. The term ‘zero accountability’ comes to mind. Socialism must be erased because it's draining our potential. Directive conveniently arriving from somewhere. Zero trust in anything (doesn't matter) and always w/the people's interests in mind.

That said; it’s imperative that we all take a good long look in the mirror from time to time and ask ourselves the most important question … ‘so what’s my part in all of this anyway’? Otherwise we’re just sticking our head in the sand just like they are.  Feeling compassion for those who are always playing the victim card?  Is a real challenge. 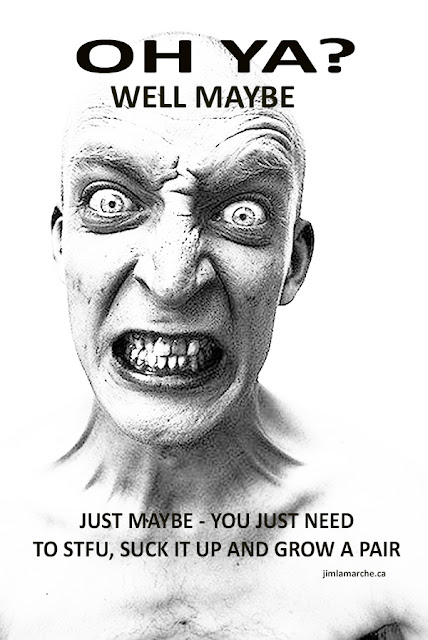 And so, a new President (and most powerful man in the world) has turned the world into an episode of Jerry Springer; you know the one where 2 women tear each other to shreds while the crowd cheers on “Jerry, Jerry, Jerry” all laughing and loving the shit-show!  What’s important here is that I get what I need (and you don’t).
That’s what I mean by entitlement. 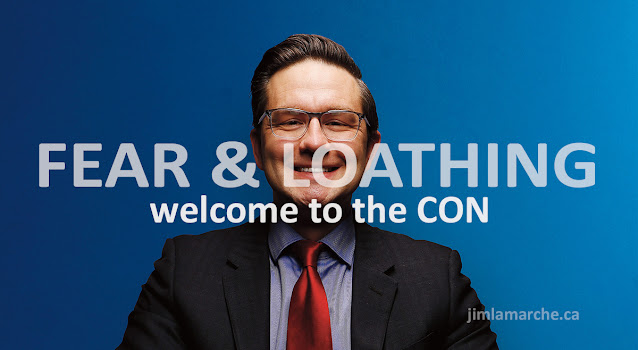 They say that 9/10 attempted suicides are just a cry for attention (cry for help) and maybe that’s what all this is about, only the 'powers that be' care even less now.  Cry for help until you're blue in the face - nothing is changing people.   One thing is certain.
Commoners are still being shafted by the elite/wealthy (the owners) in America only in all their blind faith (in voting for Donald Trump), they just jumped out of a frying pan and into the fire. 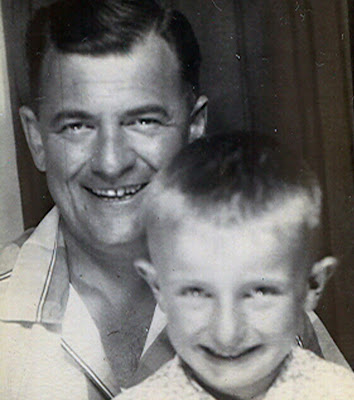 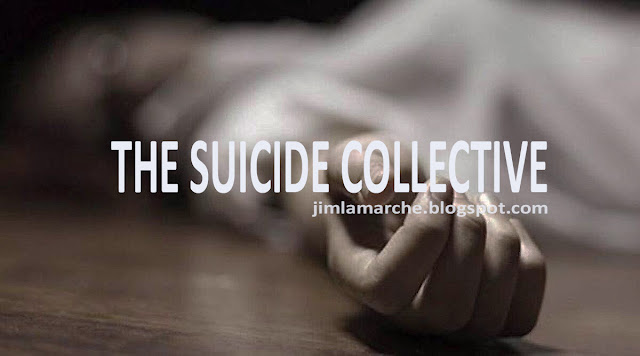 Ha. I get it
but getting all pissed off about it?
Just makes it worse
.
Posted by JIM LAMARCHE - ONE LIFE at 15:23 No comments:

'I could shoot somebody
and I wouldn’t lose voters'

optimized for night vision
assumed supposition:
they will believe whatever I want them to believe, so
that leaves you, with a problem
I think they call it
leverage.
if you had read my book
art of the deal?
you would have known that
give me the means?
and I'll show you
the way 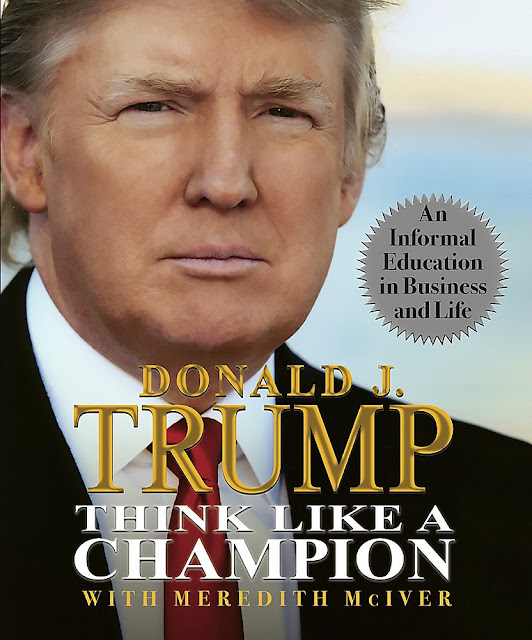 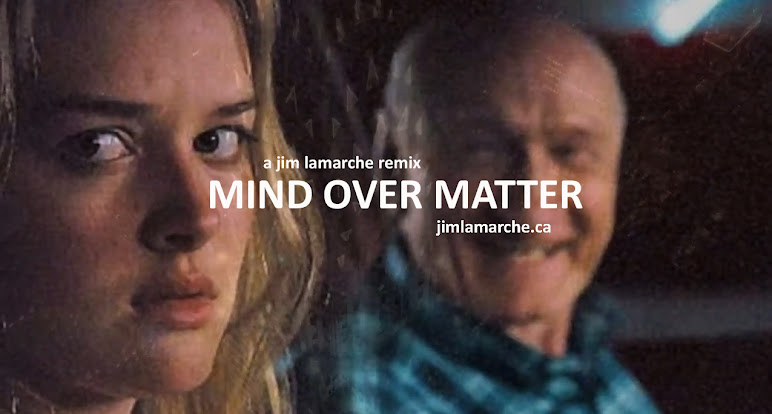